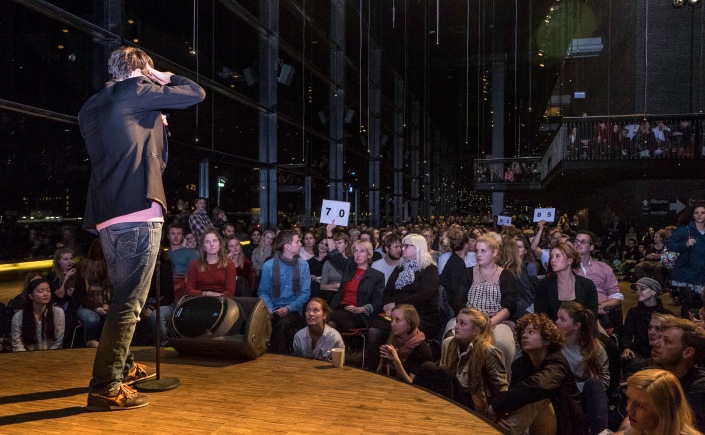 Poetry slam is a competition in spoken word. And spoken word is oral literature. And a lot more + a little bit extra.

Poetry slams have been organized in Denmark since 1998, originally intiated by the Danish poet Janus Kodal. You can find info on the current organizers and venues below.

Peter Dyreborg & Co.
Peter Dyreborg & Co. is the largest and longest running organizer in Denmark. He runs monthly poetry slams and spoken word shows at The Royal Danish Theatre’s playhouse (in Danish: Skuespilhuset) in Copenhagen as well as in Valby (a borough of Copenhagen) at Valby Culture House (in Danish: Valby Kulturhus). Apart from this, he also does special events and showcases in other parts of the country, for instance at Sønderborghus in Sønderborg. Most of these shows and events are in Danish and with Danish speaking performers, although, once in a while, feature performers from other countries perform as well.

You can get more info in English at the current website or in Danish at www.PoetrySlamKBH.dk

Other poetry slam organizers in Denmark
The organizers listed below can all be contacted via Facebook.

The Nordic Countries
Peter Dyreborg & Co. have numerous collaboration projects with organizers in other countries, especially the Nordic Countries and Germany. If you want to know more and/or need details on the other organizers, you can always contact us by e-mail.

Sweden
Poetry slam started around the mid90s and has been big for many years. Today there are regular poetry slams and spoken word events in various cities all over Sweden as well as an annual National Championship. More info via www.poetryslamsm.se

Norway
The last couple of years poetry slam has been growing in Norway, and today there are poetry slams in several cities. There has been an annual National Championship since 2005. More info at www.poesislam.no

Finland
Poetry slam has been around since 1999. There are regular poetry slams in Helsinki and a couple of other cities, and each year a National Championship in poetry slam. More info at www.hkipoetryconnection.blogspot.com

If you wish to book or invite a performer from Denmark, or you wish to contact us regarding a collaboration project, please click here.

Click here to join our English newsletter and get useful info and updates.

For info, click here, if you want to book us or get booked by us.

Poetry slam is a competition in spoken word. And spoken word is oral literature. And a lot more + a little bit extra.

Yes, it's a competition. But most of all, it's a social gathering based on a linguistic, artistic expression.

If you're in Denmark, come by. If you plan on travelling to Denmark, let us know. If you want us to visit you, invite us.
%d bloggers like this: